If you are new to the world of fitness or just haven’t delved into the foundations of bodily movement; there are specific terms to describe the direction of the joint’s movement patterns. These patterns arise from three planes in the body. Let’s learn what you need to know about planes.

Also referred to as anatomical planes, these are hypothetical planes used to determine movements, identify certain landmarks, and give an overall reference point to the human body used to standardize terminology across different individuals.

There are three main planes: Frontal (Coronal) Plane, Sagittal Plane, Transverse (Horizontal) Plane, and oblique planes. Another plane called the oblique plane is a combination of all of the planes. 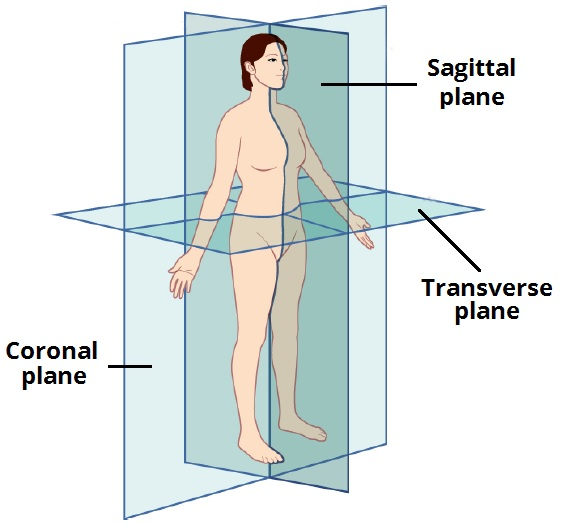 Now that you know the anatomic position, we can start fully discussing the planes and the associated movement nomenclature.

The movements associated with the frontal plane are abduction and adduction. This moves about the anterior-posterior axis as its axis of rotation. Movements like a lateral raise, a side bend, and a side shuffle demonstrate this movement.

The last cardinal plane is the transverse plane which splits the body into upper and lower halves.

Movements in the transverse plane have a rotational aspect to them moving around the longitudinal axis or a superior-inferior axis.

Rotation movements examples are supination and pronation, looking to the left and right, or performing rotational med ball slam against a wall.

Another movement example is horizontal adduction and abduction mostly pertaining to a horizontal pushing motion like the bench press or chest fly.

Oblique planes are planes that do not fit into one category by itself, rather they are combinations of multiple planes.

For example, when looking at the cable woodchop that goes diagonally from an upper left starting position to a lower right ending position, it is not traveling in just one plane but moving rotationally from left to right in the transverse plane and moving in flexion and extension in the sagittal plane.

Although these will not have a large impact on training, being able to communicate with others effectively with health or fitness professionals or just other gym goers is a great skill to have.

Now that you know what you need to know about planes, contact us or check our Instagram for more.