Did you know that muscles only shorten and do not push? How about that muscles have three different types of contractions? Let us dive a little deeper into each one and how to use them in your next workout.

For this concept to make sense, there needs to be a general understanding of how a muscle works. A muscle has two anchor points at either end that connect to either bone, fascia, or other connective tissue. These points are also referred to as the muscle’s origin or insertion depending on which part of the muscle. The origin is where the muscle starts and where it is stationary during a muscle contraction. The insertion is where the muscle ends and where the movement is produced. For example, the bicep originates within the shoulder joint attaching to the shoulder blade, runs all the way down the front of your upper arm, and then inserts an inch or so past the elbow into the anterior forearm.

For your bicep to move, a signal from your brain tells your arm to move and sends that signal to the biceps to bring those two points, the origin, and insertion, closer together. In its simplest form, this is the anatomy of muscle contraction. But how does that movement produce different contractions?

What was described above was a concentric contraction – the most well-known contraction. It is when the origin and the insertion come together. By a textbook definition, it is when there is a muscular contraction concurrent with muscle shortening. This means the force produced by the bicep was greater than the force resisting the bicep whether that be a dumbbell, barbell, a baby, a bag of groceries, or just gravity. Using the example of your bicep and a dumbbell in hand, the curling motion of a bicep curl is the concentric contraction. 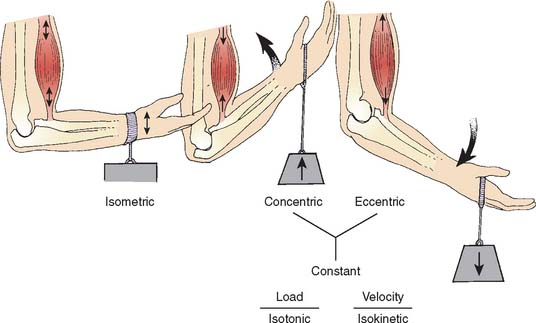 The last and final theoretical contraction that many may not know about is the econcentric contraction. This contraction is tougher to describe and occurs in very specific circumstances. To explain this type of contraction, the concepts of origin and insertion must be understood in addition to the idea of biarticular muscles – muscles that originate and insert across two joints. These muscles usually create an agonist-antagonist relationship and oppose one another in motion. Muscles such as the biceps brachii (long head) and triceps brachii (long head), rectus femoris and biceps femoris (long head), and the gastrocnemius.

In simplest terms for an econcentric contraction to occur, there must be simultaneous shortening over one joint and a lengthening over the other. Keeping to our example of the bicep, this would mean that the shoulder would have to actively extend while the elbow flexes. In this very unnatural motion, this would fulfill the criteria for an econcentric contraction. If this example is confusing, it can loosely be demonstrated in the sagittal plane at the hip and knee with the rectus femoris. The rectus femoris attaches above the hip and below the knee. When performing a squat the portion of the muscle at the hip shortens, while the portion of the muscle at the knee elongates.

Now, why does all this matter? That is a great question. It matters because of its application to fitness. When altering a workout’s intensity, looking to tempo is a great option utilizing the idea of different types of contractions.

Tempo is the variability between the concentric, eccentric, and isometric contractions to increase or decrease the difficulty of exercises. Usually written as “# – # – # – #” (e.g. 4-0-1-0) each number within the sequence refers to the number of seconds each contraction should last – eccentric, isometric at the bottom, concentric, isometric at the top, respectively. If there is an “X” written in the sequence (e.g. 4-0-X-0) this means that the concentric portion should be as fast as possible or explosive. By designating a certain amount of seconds to each portion of the repetition it can make the exercise easier or more difficult. 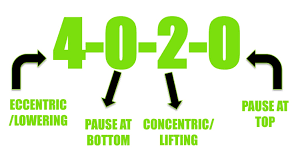 Now that you know the basics and their application into fitness. Let’s get moving!

If you want to learn more about the type of contractions do not hesitate in contacting us or checking out our social networks.